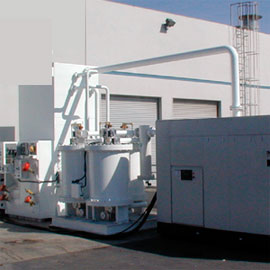 Designed for applications, including commercial requirements for LOX/LIN, where it is not required to relocate the units on a regular basis. Designed with four modules that can be transported in ISO containers. The modules are erected at the operating site and connected with prefabricated piping spolls that are shipped with unit – fully operational in less than two days. Available in two sizes, the smaller unit produces 2.0 tons per day while the large unit produces 5.0 tons per day.

The PCI GAMMA Liquid Oxygen/Liquid Nitrogen Generator is designed to be transportable on a C-130 aircraft. It can be deployed and operational in extreme remote locations in under four hours. The plant can also produce high pressure Gaseous Oxygen (GO2) or Gaseous Nitrogen (GN2) for filling cylinders. This self-contained plant, built on a 463L pallet, will fit in a C-130 aircraft, can be flown to a forward area, and generate LOX in under four hours. The primary product is Aviators Breathing Oxygen, but these plants also produce Nitrogen for servicing tires, struts, and accumulators on fighter aircraft.
Download Product Profile